The International Earth Day campaign started as a socio-environmental movement back in 1970 and is promoted yearly on the 22nd of April. In the 90’s the movement went global with the aim to raise awareness of environmental problems and driving the inclusion of environmental guidelines during law making decisions.

The #EndPlasticPollution movement of 2018 was one of the most successful ones thus far. It saw quick results, such as the swift removal of single-use plastics from restaurants where paper straws have replaced their plastic counterparts. It also promoted the long term change in the way we use plastics and encouraged us to reduce our dependency on the non-recyclable plastic types.

This year we move into the Earth’s Kingdom of Animals, which includes all of her biodiversity from mammals to critters. Here The Good, The Bad and The Ugly come to light. The 2019 Protect Our Species campaign joins several very large global projects, which all resonate clearly with the UN’s Biodiversity Decade running since 2011. Some major role players include:

The 2019 Earth Day campaign focuses on 6 species categories. I added some third-party websites for more information on the conservation efforts of each:

It was quite a challenge to get infographics for this article, but after some scouring I managed to get a handful that I feel are the most insightful. They paint quite the picture… 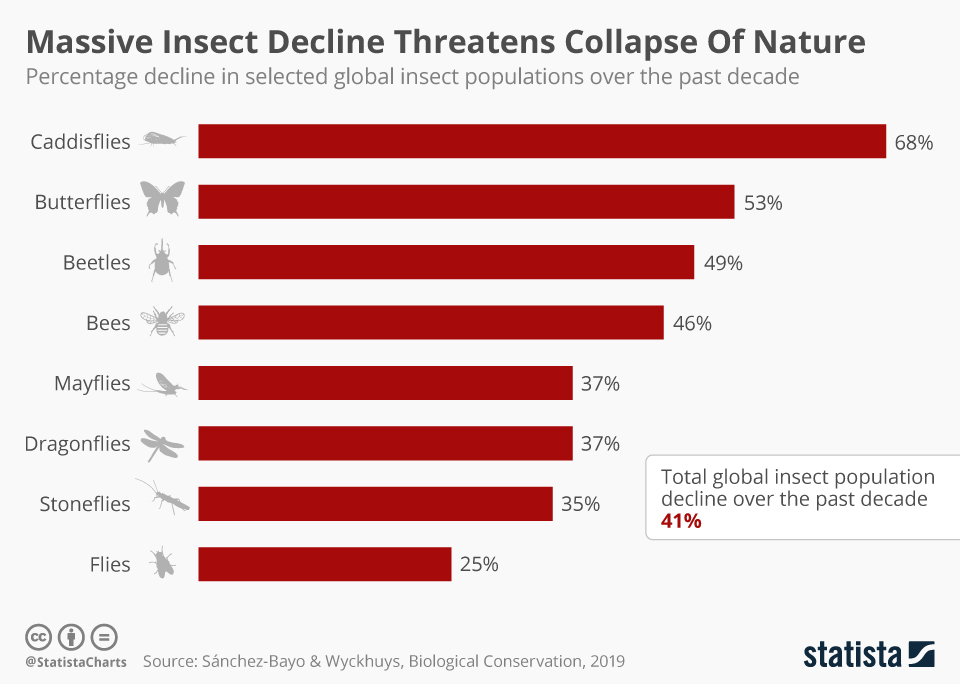 You will find more infographics at Statista

Truly alarming stuff when you start working through them systematically! 😬

For this article; the species I would specifically like to discuss are the non-mammalians. This is largely because we have an inherent biological/evolutionary bias towards being concerned about other mammals – the large and/or pretty ones get all the attention! Additionally, our society has conditioned us to be afraid or grossed out by animals other than mammals or birds.

Amphibians, Insects and Arachnids especially get a bad rap because they are seen as ‘Bad’ or ‘Ugly’ and thus we do not tolerate their right to existence. My formal education is in Genetics and I can tell you that there is nothing bad about any of these animals and they all play crucial environmental roles – else they would not be here!

I have quite a fondness of our mini-national geographic episodes, staring key species from the insect world, that takes place daily in our own backyard gardens and I always make an effort not to use any pesticides not even ‘organic’ ones. I try to create an environment where natural predators do the pest control work for me. For more information on building your own Insect/Bee Friendly Garden, see this resource.

Generally, I think a large problem here is the fact that people think insects are ‘Out to Get Them’. That if a bee happens to be in your vacinity it is because it was sent by the queen to sting you atop your head (especially seeing as you are allergic) and thus cue the frantic fight or flight response. It is a senario of life or death where its either you or the bee; subsequently you run around squeeling or you attempt to stomp it into oblivion… 😩

Animals have evolved to avoid risky situations, especially ones that find them going up against another animal who is a few thousand times their own size. Once more, becoming frantic only serves to threaten the animal, who when cornered will defend itself. However, this is biologically expensive, which can result in harm to the animal itself. In the case of the bee, a sting is a death sentence, therefore she is not likely to come around and sting you just because. The same goes for spiders, they will likely harm or get killed themselves when finding themselves in a tussle with you. Thus most animals high tail it outta high-risk situations and will likely run rather than jump on you…

*Ahem* … My, uh, pet peeve preach is over. Let me move on the the main reason for my writing this post: Research Into Coral Reefs, where Science Saves the Day (or the Species Should I Say) 😁 LOL!

Coral reefs are an underwater ecosystems that can be found throughout the world’s oceans. The Great Barrier Reef being the largest and likely most widely known. They are some of the most productive ecosystems and host up to 25% of the ocean’s marine species. In addition, they provide several ecosystem services with economic benefits in excess of 30+ billion USD, which include:

Most of us are familiar with the image of a Coral Reef and that they have been under threat for decades now. This is due to the mismanagement of this natural resource, such as over-fishing and harvesting of marine animals as well as pollution, rising sea temperatures and coral bleaching. The estimated loss of these ecosystem services clocks in at 100 000 to 1 million USD over a 25 year period!

An estimated 50-80% of coral cover has been lost in the last decade from several coral reefs on a global scale, which has sparked research into new avenues for coral reef restoration. Conservation awareness along with breakthrough scientific discoveries has seen the systematic return of large section of coral reefs subjected to the restoration efforts.

The main method for coral restoration is coral farming or gardening (Aquaculture), which involves growing coral polyps from microscopic larvae into large colonies. However, it is a long and tedious process lasting several years with large slow-growing species. Coral gardening is often combined with substrate creation for corals to colonize (such as ship wrecks or wire mesh) as well as relocation to areas of priority.

Dr David Vaughan with the MOTE Marine Laboratory and Aquarium developed a rapid growth method for corals. He discovered the technique by accident, very much like Alexander Fleming’s accidental discovery of Penicillium. In 2006 while caring for corals, he accidentally broke a coral specimen from one of the large slow-growing species. He had already deemed the specimen nonviable prior to the breakage, but he simply could not destroy the specimen. He abandoned the broken pieces for several days. To his amazement, upon his return the coral fragments had self-healed and grew back to their original size before breaking. He reconstructed the experiment and found the coral fragments to grow and fuse into large colonies in just a few months, in comparison to a few years! With additional research and some refinement he improved his technique and by 2011 was producing thousands of corals for recolonization. Here is a quick introduction video (2 minutes 30 seconds) to the technique:

Here is another extended video (9 minutes):

This is a great example of how accidental discoveries in the lab can have a global impact and that we can develop methods to postpone this Sixth Mass Extinction. However, it will take a perspective change and effort from each of us as global citizens! Collective and collaborative individual action can bring change, such as with the far-reaching adoption of the #EndPlasticPollution campaign. It takes a small start, such as planting a few wildlife friendly plants in your garden and making a long-term commitment towards reducing your plastic use/waste. Should you want to get more involved, many of the websites I have listed throughout the article have volunteer and donation initiatives. Lastly, the best way of driving change is to educate and create awareness through your social circles! Thus, create, educate, entertain, inspire and share with Earth Day!

Additional Resources for the Kids:

4 thoughts on “Save Our Species with Science: The Good, The Bad & The Ugly of Earth Day”